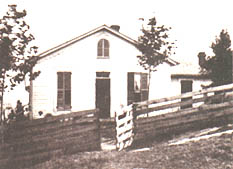 The End of Jesse James

Notorious outlaw Jesse James was shot and killed in this house on April 3, 1882. He was killed by Bob Ford, a member of the James gang, to collect a $10,000 reward offered by Governor Tom Crittenden.

Jesse died at the age of 34 after living a lawless career for 16 years. He was living with his wife and two children under the assumed name of Tom Howard at the time of his death.

Jesse was shot from behind while he stood on a chair to straighten a picture in his own home. After the shooting, Jesse's wife and two children and his mother, Mrs. Zerelda Samuel, spent the next two nights at Patee House, which was then called the World's Hotel.

Today the James Home is a museum dealing with the life and death of Jesse James. In 1995 forensic scientist James Starrs exhumed the outlaw's body at Kearney, Missouri, for DNA tests. The results showed a 99.7% certainty that it was Jesse James who was killed here in 1882. Artifacts from the grave are now on display including the coffin handles, a small tie pin Jesse James was wearing the day he was killed, a bullet removed from his right lung area, and a casting of his skull, showing the bullet hole behind his right ear.

The Jesse James Museum is operated by the Pony Express Historical Association with all proceeds from admission charges going to help maintain both the James Home and Patee House Museum. 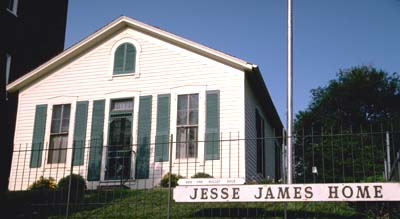 About the James Home

The James Home was originally located about two blocks north of its present location, at 1318 Lafayette Street, on a high hill overlooking Patee House. In 1939 it was moved to the Belt Highway in St. Joseph as a tourist attraction.

Mr. and Mrs. Robert Keatley purchased the James Home in 1977 and donated it to the Pony Express Historical Association. The house was moved back to its original neighborhood and today it is located on the grounds of Patee House Museum.