Alva n. mead, 38 years old, was killed in a gun battle on the early morning hours of March 18, 1944. Officer Mead was attempting to arrest a sixteen year old burglary suspect named Neil Edward Nolan. Officer Mead and two other officers in a police squad car came upon Nolan at the corner of Fifth and Edmond streets.

The department started to search for Nolan, who had gone to the Watson Brothers' Transportation Company at 510 South Eighth Street, where he buried the two guns and money he had taken in a burglary at the B&M Tavern on South Sixth Street. Employees at 510 South Eighth Street called a taxicab for Nolan after he told them that he had been on a roof hunting pigeons, and had fallen off and broken his leg. The taxicab driver, George Herren, knew the police were looking for Nolan and drove him to the police station.

When Herren walked into the police station he met police Chief Swepston and said, "I have a guy who says he fell off a roof, he may be the one you want." He was. Nolan had been shot in the left leg by Officer Mead and he was later sentenced to prison for his crime. Officer Mead had been a prize fighter prior to his employment with the City. Officer Mead was survived by his wife and two children. 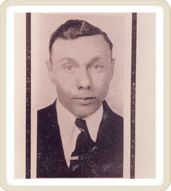