Albert M. Hall, 23 years old, responded to a riot call on the afternoon of October 26, 1921 at 2134 South Seventh Street, where a robbery suspect, Carlos Henderson, had barricaded himself and shot at police officers. Upon arriving, Clerk Hall and Patrolman Brinkley advanced toward the house from the west side. This side of the house was covered in lattice work, which was of great advantage to Henderson, as he was able to see the men approaching, while they were unable to see him.

Clerk Hall was carrying a revolver, and Officer Brinkley had a riot gun, which had been loaded. Officer Brinkley observed Henderson pass by a window and shoved the shotgun through the open window, and against Henderson's head. Officer Brinkley pulled the trigger, but the gun failed to fire. A second later, a shot was fired from inside the house and Clerk Hall fell, with a bullet in his chest.

Officer Brinkley and motorcycle Officer Buxton pulled Clerk Hall away from the house. The house was later set on fire and Henderson was shot four times as he exited a second story window, resulting in his death. Chief of detectives Johnson was also fatally wounded in the gun battle with Henderson. Prior to his service with the City of St. Joseph, Clerk Hall had been a Sergeant in the United States Army and had fought in the First World War. Clerk Hall was single and survived by his parents. 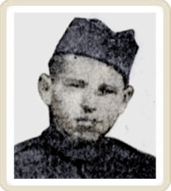